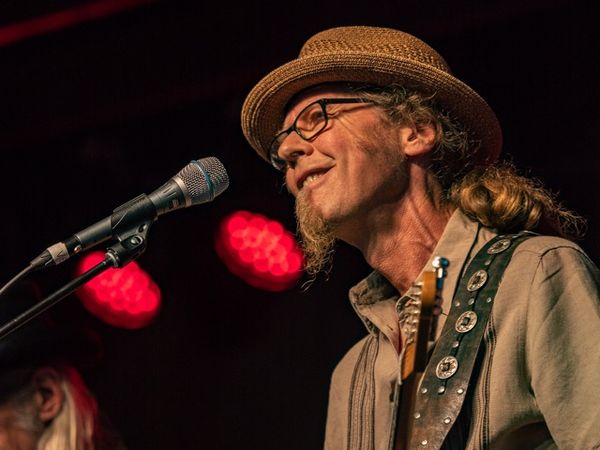 Meet Canadian roots music artist and snowboarding pioneer Lester Quitzau, a mellow guy who throws down a heavy groove. In a field where intangibles like feel and integrity count for so much, Quitzau has forged an exemplary career. Distilling the experience of the past 33 years of writing, recording and performing his music, Lester has come up with an approach that is his own. His unique style and fluidity on slide, acoustic and electric guitars, coupled with his well crafted songs and warm vocals, are the fruits of this musical journey. Many of his followers have watched his career with love and loyalty in what began as a solid traditional folk/ blues foundation, that has branched out into myriad of influences and a sound that is his own.

What began with a solid blues apprenticeship in the funky working-class bars of Alberta's capital city has grown into an eclectic and constantly evolving musical journey for the guitarist, singer, songwriter, composer and producer.

He learned to play as a child, and by fifteen he'd saved enough to buy his first guitar, a Les Paul copy. Exposed to rock & roll by his older brother, and later the Pure blues of John Lee Hooker, the major blues influence of Lester's young life came at a skanky, cinder-block hotel in Edmonton called the Ambassador, long a mecca for legends direct from Chicago as well as the tight, inventive groups like Downchild Blues Band, Dutch Mason and David Wilcox.

In the early 80s Lester was performing with a rocking blues trio called The Slipping Lizards. The band was popular in Edmonton, but the accompanying hard-partying lifestyle soon wore thin. The band split and in 1987 Lester continued with a band called The Yard Dogs which included Farley Scott,  Dwayne Hrynkiw, and bass player Farley Scott, who was especially influential.

In 1988 The Yard Dogs released Live at the Commodore. This was followed in 1989 by Take Time which was released under Lester's own name.

After a move to BC's West Kootenays in 1993, Lester returned to Edmonton in 1994 and released his first album, Keep on Walking: an elemental, stripped down, funky all-acoustic approach to the blues.

This was followed by A Big Love in 1996, a release that surprised listeners who might have been expecting a second instalment of the first album's straight-ahead acoustic blues. Where the first CD celebrated the traditional, the new one was mostly electric. And although the music was still blues-based, the album embraced experimentation and the wealth of possibilities an artist with Lester's talents could offer. The arrangements were multi-layered and often lush- effectively supporting and showcasing his arrival at a stronger and more confident level of song writing. His audience grew with the release of A Big Love, as did his stature among critics, resulting in his first JUNO Award nomination.

The Lester Quitzau Band (Andy Graffiti, Brett Miles, Chris Byrne, Rob Vause, and Jason Cairns) set out on tour in 1996 in support of A Big Love, and for the first time he experienced the enthusiasm and respect of discerning European audiences. That same year Lester collaborated with Kent Sangster, Sandro Dominelli, and Dale James in the group A Love Supreme. Over the next five years Lester was discovered by an ever-widening international audience, primarily through his year-in, year-out touring on the folk/roots and jazz and blues festival circuits.

- 2000 Lester partnered with Bill Bourne and Madagascar Slim to form Tri-Continental. Their first album won a JUNO award and the band toured extensively playing most of the major festivals across Canada.

- 2001 the Very Electric Trio (Lester, Lyle Molzan and Greg Johnson) released So Here We Are. Like A Big Love, the album was a success and received many accolades: "An absolutely stellar record" - Cathy Ennis (CKUA Radio Network).

- 2002 brought Lester's meeting, collaboration, and marriage to celebrated singer/songwriter Mae Moore.  Their stripped down, acoustic recording  Oh My was released in 2003, and met with success, garnering a West Coast Music Awards nomination.

- 2003 Lester collaborated with the Edmonton Symphony Orchestra, for two performances at the prestigious Winspear Centre.

Between 2002 and 2004 Tri-Continental released three more albums, and toured Europe and Canada extensively until 2006.

From 2006 to 2009, Lester and Mae began to live their dream of a committed and sustainability-based relationship with their Gulf Island homestead. There they found a different rhythm: slower, more reflective, but certainly no less musical at its heart.

This is the impulse that finds such powerful musical expression in The Same Light, released in 2009. It represents the culmination of Lester's years spent re-connecting with the land, but it's also a reflection of some serious musical wood-shedding and soul-searching done over that same period. The CD flows naturally from blues to ballads, and to truly inventive jazz improvisations.